Dixie Kong is a Monkey in Donkey Kong Country.

She is a lion cub

She played Cera in The Land Before Time (Otto Gameplays13 version)

She is a hatchling Triceratops. 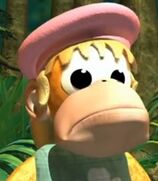 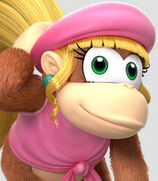 Add a photo to this gallery
Retrieved from "https://parody.fandom.com/wiki/Dixie_Kong?oldid=2566032"
Community content is available under CC-BY-SA unless otherwise noted.