The Parody Wiki
Register
Don't have an account?
Sign In
Advertisement
in: Doc McStuffins Characters, Characters, Humans,
and 21 more

Dottie McStuffins (nicknamed Doc McStuffins) is a 6-year-old (later 7) girl who is the main protagonist from the 2012 animated Disney Junior series, Doc McStuffins.

Doc wears a glittery purple headband with a flower (consisting of 5 pink petals around its white center on it), a white lab coat with rolled-up sleeves, pockets on each side, and a timberwolf button on its left side, a lavender fleece shirt with purple stripes, a pink fleece skirt with pointy cuts, lavender knee pants with pink and rose polka dots on them, a pair of purple ankle-length socks, a pair of sparkly pink sneakers with white trimmings, and her magic stethoscope (consisting of both pink ear tips and chest plate, both lavender ear tube and tubing, a rose chest piece, and a white diaphragm with its insignia consisting of a sienna Band-Aid with a red heart on its center diagonally to the left on a purple outline circle) that causes her toy buddies to come to life when her family and human friends aren't with her. When treating pets, she normally wears underneath her doctor's coat a green shirt with pink paw prints. In Season 4, she wears a toysponder, a magical bracelet resembling a bandage. She is usually seen in other clothes in some episodes.

She is a dwarf.

Doc plays Angelica in Miles Callisto of the Caribbean

She is a little girl.

Doc with Winnie the Pooh
Into the Hundred Acre Wood! 4.jpg 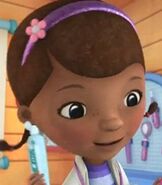 Doc McStuffins as the Hippopotamus 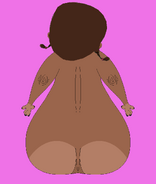 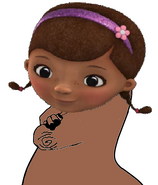 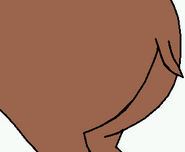