Doedicurus clavicaudatus was a prehistoric glyptodont, living during the Pleistocene until the end of the last glacial period, some 11,000 years ago. This was the largest known glyptodontid, and one of the better-known members of the New World Pleistocene megafauna, with a height of 1.5 meters (4.9 ft) and an overall length of around 4 meters. Doedicurus could reach a mass of 1,910 to 2,370 kg. It had a huge domed carapace that was made of many tightly fitted scutes, somewhat similar to that of its modern-day relative, the armadillos. Its tail was surrounded by a flexible sheath of bone and had long spikes or knobs on the end, at least in male individuals. 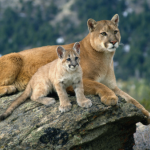