The Parody Wiki
Register
Don't have an account?
Sign In
Advertisement
in: Characters, Animals, Domestic Animals,
and 125 more

Domestic geese (Anser anser domesticus) are domesticated grey geese kept as poultry for their meat, eggs, and down feathers since ancient times. Approximately 700 million geese are slaughtered each year for meat worldwide. They have been selected for larger size, with domesticated breeds weighing up to 10 kilograms (22 lb), compared to the maximum of 3.5 kilograms (7.7 lb) for the wild swan goose and 4.1 kilograms (9.0 lb) for the wild greylag goose. This affects their body structure; whereas wild geese have a horizontal posture and slim rear end, domesticated geese lay down large fat deposits toward the tail end, giving a fat rear and forcing the bird into a more upright posture. Although their heavy weight affects their ability to fly, most breeds of domestic geese are capable of flight. Geese have also been strongly selected for fecundity, with females laying up to 50 eggs per year, compared to 5–12 eggs for a wild goose. As most domestic geese display little sexual dimorphism, sexing is based primarily on physical characteristics and behavior. Males are typically taller and larger than females, and have longer necks. In addition, males can be distinguished by the protective behavior they exhibit towards their mates and their offspring - the male will typically stand between his partner and any perceived threat. Changes to the plumage are variable; many have been selected to lose dark brown tones of the wild bird. The result is an animal marked, or completely covered in white feathers. Others retain plumage close to the natural; some, such as the modern Toulouse goose look almost identical to the greylag in plumage, differing only in structure. White geese are often preferred as they look better plucked and dressed, with any small down feathers remaining being less conspicuous. From the time of the Romans, white geese have been held in great esteem. Geese produce large edible eggs, weighing 120–170 grams (4.2–6.0 oz). They can be used in cooking just like chicken's eggs, though they have proportionally more yolk, and this cooks to a slightly denser consistency. The taste is much the same as that of a chicken egg, but gamier. Like their wild ancestors, domestic geese are very protective of their offspring and other members of the flock. The gander will normally place himself between any perceived threat and his family. Owing to their highly aggressive nature, loud call and sensitivity to unusual movements, geese can contribute towards the security of a property. In late 1950s South Vietnam, the VNAF used flocks of geese to guard their parked aircraft at night due to the noise they would make at intruders. Because domestic geese descended from the Greylag goose are effectively the same species as their wild ancestor, escaped individuals readily breed with wild populations, resulting in the offspring sometimes resembling either one of their parents, or bearing mixed plumage with patterns of grey and white feathers and orange beaks. 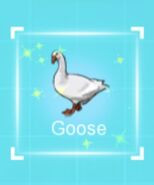 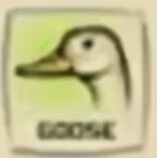 Tome of the Unknown (pilot) 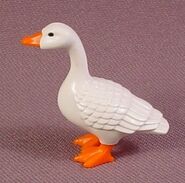