Donald Earl "Don" Messick (September 7, 1926 – October 24, 1997) was an American voice actor, best known for his voice over roles for Hanna-Barbera. His best-remembered vocal creations include Scooby-Doo, Bamm-Bamm Rubble and Hoppy in The Flintstones, Astro in The Jetsons, Muttley in Wacky Races and Dastardly and Muttley in Their Flying Machines, Sebastian the cat in Josie and the Pussycats; Gears, Ratchet, and Scavenger in The Transformers, Papa Smurf in The Smurfs, and Dr. Benton Quest in Jonny Quest. 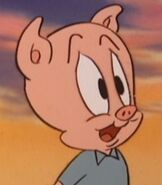 Hampton J. Pig
Add a photo to this gallery
Retrieved from "https://parody.fandom.com/wiki/Don_Messick?oldid=788122"
Community content is available under CC-BY-SA unless otherwise noted.