The Parody Wiki
Register
Don't have an account?
Sign In
Advertisement
in: Characters, Female Characters, Birds,
and 10 more

Dorrie Turnell is a character featured in Animalympics.

She is a professional figure skater representing North America in the Animalympic figure skating event. Her manager is Robert Pigwood.

She tends to get emotional when she wins 1st place, whether at the Junior World Championships or at the Animalympics, breaking down into tears. She also has a side of herself wishing for the simplicity of her younger days.

Dorrie Turnell is a professional figure skater who rose to stardom following her victory at the Junior World Championships. As a result, she was featured on several publications, such as LICE, Newsbeak, Playbird, and Peeper. She was also in a TV commercial for Preen-ette molting shampoo, along with music box dolls being made of her. She had also toured with the Ice Parades traveling entertainment show.

She is first seen in the film posing in a two-piece icebreaker made by Enrico Poochie at a fashion show, prior to the Animalympic figure skating event.

It was after the performance of Olga Cluckinsky and Nikita Krawlinoff that Barbra Warblers did a ZOO On You report on Dorrie, covering her rise to fame. She is next seen doing her performance on the ice, where at the end she molted her feathers and quickly got into a bathrobe. She is then seen on the podium with the gold medal, going into tears at her victory like she did at the Junior World Championships. 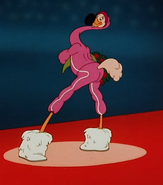 During the fashion show

Dorrie at the Junior World Championships 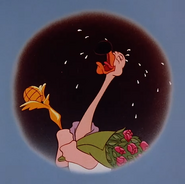 Dorrie crying at her victory at the Junior World Championships

Dorrie in the Preen-ette commercial
Community content is available under CC-BY-SA unless otherwise noted.
Advertisement