The Parody Wiki
Register
Don't have an account?
Sign In
Advertisement
in: Characters, Male Characters, Students,
and 18 more

Doug Funnie is a main protagonist from Doug. He is the titular character and chief protagonist of both the Nickelodeon and Disney animated series Doug. Douglas is a shy, insecure, and somewhat clumsy 11 (12½ in the Disney version) year old boy with a wild imagination and a big heart. He owns a very expressive dog named Porkchop.

Doug was born in the town of Bloatsburg to Phil and Theda Funnie, their second child after Doug's older sister Judy Funnie. At the beginning of the series, Doug's family moves to Bluffington from Bloatsburg after his father was given a new job position there. In the short time after his arrival, Doug had already formed relationships with many of the local kids, developing a fast friendship with Skeeter Valentine in particular, among others. It was also during this period that Doug developed a crush on a girl named Patti Mayonnaise, which would form the basis for many of his goals.

Doug is a 6th Grade average kid who often comes off as shy and insecure, but is a good person at heart who always tries to do the right thing, despite his frequent failures. He is naive and gullible at times, and fears that people will think of him as a loser. He is a talented artist with a vivid imagination, allowing him to create his own superhero comic, Quailman, whose adventures are usually based on exaggerated and impossible interpretations of real life predicaments that Doug finds himself in. He sometimes lets his fear and insecurities get the best of him, which causes him to dream up horrifying and chimerical worst case scenarios to certain dilemmas. These insecurities are often exploited by Roger Klotz and his gang, and used to torment him. His affection for Patti Mayonnaise is an ever present part of his character, but due to his young age, he is inexperienced in the field of love. Nevertheless, he hopes to someday have a relationship with her.

Douglas is considered an imaginative young man and has created numerous fictional alter ego that he often uses for his comics. He also imagines himself as characters from famous films that he admires when he tries to imagine how his heroes would come out of a difficult situation in which he is currently.

Skeeter is Doug's best friend, who he met shortly after he first arrived to Bluffington. He helped to introduce him to other local kids. They usually get along in every episode, but in some they've managed to bump heads, although they always manage to resolve their differences and stay best friends to the end.

Patti is Doug's crush throughout the series. They seem to get along well. Some of his nightmares consist of her potentially rejecting his advances towards her, or not being able to save her as a damsel in distress.

Roger is Doug's main enemy, who always goes out of his way to torment Doug (and to a lesser extent, Skeeter). In times when Roger is feeling down, he will be nice to Doug and even confide in him, particularly during graduation episode when it is their last day at middle school. Despite his constant antagonizing towards Doug, there have been instances of friendship between them.

Relationship with the Sleech Brothers

Doug is good friends with Al and Moo Sleech. In the twins' first appearance, Doug was rather afraid of them because of their odd personalities, but this was resolved at the end of the episode and the three became friends. From that point forward, Doug considers Al and Moo two of his best friends, as proven when Doug, Skeeter, Al, Moo and Porkchop start a lawn mowing business together as friends in Doug Inc.

Relationship with Other Characters

Doug is friends with most of the other kids at his school, although he is often misunderstood by them. 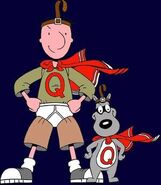