Dr. Buford Bubbles is the main antagonist in The Chipmunks Go to the Movies episode Sploosh. He was portrayed by Alvin Seville.

He played Negaduck in Darkwing Alvin

He Played Mr. Snoops In The Rescuers (Chris1703 Style)

He Played Himself In Dale's Laboratory (1951Movies Style)

He Played Yu In Jeanettelan

He Played In A Boy Named Max

he is a Agerssief Indian

he is ruler of the underworld

He is a mean Griffiondor student

He Played Itachi Uchiha In Fievelruto

he is Sasuke Evil Brother 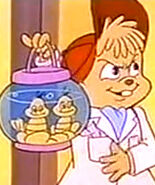 "You idiot! You cost me word wide publicity!"

Add a photo to this gallery
Retrieved from "https://parody.fandom.com/wiki/Dr._Buford_Bubbles?oldid=2035216"
Community content is available under CC-BY-SA unless otherwise noted.