The Lizard is a monstrous reptilian supervillain from the Marvel comic book series of Spider-Man. Originally he was a biologist who was one of Peter Parker's college professors, Dr. Curtis "Curt" Connors. Connors became the Lizard after injecting himself with reconstructed lizard DNA to regrow his right arm, which he lost in war. The arm grew back, but Connors was also mutated into a savage man-lizard, with bulletproof scaly skin, wall-crawling abilities, superhuman strength, agility, and durability, and the power to telepathically control any reptile within a two mile radius of him. He is also uncontrollable and unstable due to the Lizard transformation.

In his Lizard persona, he wants to create an army of super-reptiles and take over the world by destroying all mammals- including humans. He is one of Spider-Man's few villains that can physically overpower him in every way.

One of the only ways that Spider-Man can defeat the Lizard is by forcibly giving him a 'gene cleanser' antidote, which transforms him back into a human. But even the antidote can never erase the Lizard from the good doctor's subconscious forever, and under times of great stress, the monster would come out again.

Later, the Lizard gained the ability to emit phonemes that would bring out the 'primitive' part of a victim's brain and make them go into a animal-like state of mind; cowering, running, and acting like hunted prey.

Much like the Hulk, Lizard's intelligence has varied, as sometimes he retains Connors' brilliant intellect, and is able to perform scientific experiments as the Lizard.

Recently the Lizard killed Dr. Conners's son, Billy, and that finally made Conners snap. His Lizard persona is now in complete control, and continues in his quest for the extinction of humans. 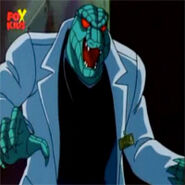 Add a photo to this gallery
Retrieved from "https://parody.fandom.com/wiki/Dr._Curtis_Connors/Lizard?oldid=1285052"
Community content is available under CC-BY-SA unless otherwise noted.