The Parody Wiki
Register
Don't have an account?
Sign In
Advertisement
in: Villains, Phineas and Ferb Characters, Characters,
and 30 more

Mr. Smee in Orinoco Pan and Orinoco Pan 2: Return to Neverland
Dr. Jekyll in The Pagemaster (HappyEnding912 Style)
Professor Marvel in The Wizard of Oz (CityMaker Style)
Professor Screweyes in We're Back! A Critter's Story
Humbert the Huntsman in Lily White and the Seven Men
Dan Povenmire
Dr. Heinz Doofenshmirtz is the main antagonist (and sometimes an anti-hero) in the popular animated Disney Channel series, Phineas and Ferb. Doofenshmirtz first appeared in the pilot episode of the series and since then has appeared in every episode. An incompetent and forgetful mad scientist, Doofenshmirtz is the primary villain of the series and the mastermind behind the B-Plot. His nemesis is Perry the Platypus, who foils almost all of his schemes, though a few turn out to be successfull. Doofenshmirtz's goal in life is to "take over the entire Tri-State Area" and attempts to do so with invention that tend to have -in actor as the suffix. You will often see the Dr. having flashbacks to his youth showing the neglect received from his parents and his ostracisation by his peers. Dr Doofenshmirtz will from time to time break down into song about his past or inventions, typically aimed at somebody like his nemesis Perry the Platypus or his daughter Vanessa. His daughter, Vanessa Doofenshmirtz, daughter of Heinz and Charlene Doofenshmirtz, is a recurring character in his subplot of the show. Whilst Dr. Doofenshmirtz is seen to be evil with his crazy inventions and grand schemes, he can be understood to not truly be a villain or an evil person. He is purely trying to be noticed, successful and/or accomplished. Something that he feels he lacks in due to his deprived past without much acknowledgement of his achievements as a scientist. 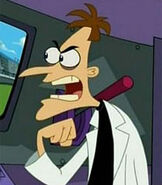