Doctor Frankenollie is a mad scientist who attempted to switch Mickey's brain with that of his giant monster Julius in Runaway Brain. His name is a play on two famous Disney animators, Frank Thomas and Ollie Johnston. He appears to also have been inspired by the earlier Mickey Mouse villains Professors Ecks, Doublex, and Triplex. 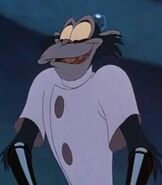 Add a photo to this gallery
Retrieved from "https://parody.fandom.com/wiki/Dr._Frankenollie?oldid=1081194"
Community content is available under CC-BY-SA unless otherwise noted.