Doctor Frankenstein is the main antagonist of the direct-to-video film Alvin and the Chipmunks Meet Frankenstein. He is an old man with a pointed nose and chin. The Doctor is a scientist with a particular interest in creating life out of dead body parts. As a result, he is the creator of Frankie (which he created at least two times). In the film he is a quite cranky person who doesn't like people unless he is interested in their parts like Dave's kidneys. Frankenstein also despises the mascot Sammy Squirrel, though in the end he is stuck in the costume and is forced to sing to children. 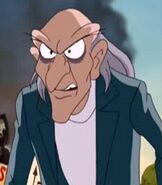