Dragon is a Cat in The Secret of NIMH

He is a Crocodile

He played Genie Jafar in Tomladdin the Cat

He is a red rotten Genie

He is a screeching owl

He played Lucifer In Jasminerella

He played Brutus In The Rescuers (Stephen Druschke's Style)

He is one of Madame Medusa's pet crocodiles.

He played The Cave of Wonders In Justinladdin

He played Felicia In The Great Knight Detective

He played The Bird in A Mouse's Life (my version)

He is a Were-Rabbit.

He played Undertow In The Litttle Ray 2

He is Morgana's Henchman and sidekick

He played Ferdinand in Bagheera and Blu: The Movie and Nezumi-Otoko/Rat Man and Kitaro: The Movie 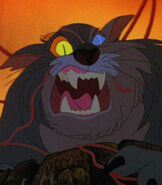 Add a photo to this gallery
Retrieved from "https://parody.fandom.com/wiki/Dragon_The_Cat?oldid=2072673"
Community content is available under CC-BY-SA unless otherwise noted.