The Parody Wiki
Register
Don't have an account?
Sign In
Advertisement
in: Cats, Characters, Protagonists,
and 36 more

Duchess is the main character from the 1970 Disney film called The Aristocats.  She is a female Persian cat and the mother of Marie, Toulouse, and Berlioz, along with the love interest and later wife of Thomas O'Malley.

Duchess is very elegant, beautiful, and ladylike, being the pet to an aristocrat. She is very devoted to her owner, Madame Adelaide Bonfamille. She is kind and friendly to everyone. She is both caring and protective toward her children and also tries to encourage them to develop into proper members of French society. She also is a connoisseur of music and presumably teaches her kittens to sing and play the piano.

Duchess also is shown to be slightly pacifistic, as she scolds her kittens for "play-fighting". She is sweet and compassionate and is willing and able to make friends with anyone, no matter their background. She also seems to show concern for others, as is evidenced when she calls out to Thomas O'Malley as he floats down the river after he throws Marie to safety.

Duchess and her three kittens Marie, Berlioz, and Toulouse, live in a large mansion in 1910 Paris with their owner Madame Adelaide Bonfamille, a retired opera singer. At the beginning of the film, the family is returning from a carriage ride. Back home, Duchess oversees Toulouse's painting lesson and Marie and Berlioz's music lesson. Later, Madame Bonfamille meets with her lawyer and dear friend, Georges Hautecourt. After kissing Duchess's tail (which the lawyer believes to be Madame Bonfamille's hand), they settle down to business. Madame reveals that, after her death, she intends to leave her vast fortune to Duchess and her kittens. At the end of their lifespan, Madame's butler, Edgar would inherit. Edgar overhears, and plots to remove the cats from the inheritance, as he believes he would die before getting to inherit.

That night, Duchess and the kittens are drugged using milk mixed with sleeping pills. Edgar catnaps Duchess and her kittens and leaves them in the French countryside so that Madame Adelaide would think the cats had run away so that she could give the entire fortune to himself. After Edgar flees back to Paris following a scuffle with two feral dogs, Duchess and her kittens awake to very unfamiliar surroundings, and endure a frightening and rainy night together in the basket they were transported in. The next morning, Duchess meets Thomas O'Malley, an alley cat, who offers to guide them back to Paris. They have difficulties returning to the city, briefly hitchhiking on the back of a milk cart before being chased off by the driver. Marie subsequently falls into a river and is saved by Thomas. They then meet a pair of English geese, Abigail and Amelia Gabble, who are traveling for Paris. The group heads off, marching like geese until they reach Paris and come across the girls' drunken Uncle Waldo. Abigail and Amelia then depart to take Waldo home.

Traveling across the rooftops of the city, the cats meet Scat Cat and his band, close friends to O'Malley, who perform the song "Everybody Wants to Be a Cat". After the band has departed and the kittens lie in bed, O'Malley and Duchess spend the evening on a nearby rooftop and talk, while the kittens listen at a windowsill. O'Malley offers to have Duchess stay and be with him, but she sadly turns him down, largely out of loyalty to Madame Adelaide.

The next morning, Duchess and the kittens make it back to the mansion, whereupon O'Malley departs sadly. Edgar sees Duchess and kittens coming and captures them, placing them in a sack hidden in an oven. Duchess tells Roquefort to pursue O'Malley and get help. He does so, whereupon O'Malley races back to the mansion, ordering Roquefort to find Scat Cat and his gang. Edgar places the cats in a trunk which he plans to send to Timbuktu, Africa. O'Malley, Scat Cat and his gang of Alley Cats, and Frou Frou all fight Edgar, while Roquefort frees Duchess and the kittens. In the end, Edgar is tipped into the trunk, locked inside, and sent to Timbuktu himself. Madame Adelaide's will is rewritten to exclude Edgar and include O'Malley and any future kittens he and Duchess have. Madame also starts a charity foundation providing a home for all of Paris's stray cats. The grand opening thereof, to which most of the major characters come, features Scat Cat's band, who perform a reprise of "Everybody Wants to Be a Cat".

Duchess made a few cameo appearances in the animated series. Her only speaking role was in "Ladies' Night" where Daisy Duck announced a phone call for Duchess, having many Disney Princesses believing she's referring to them. Duchess then arrives and states, "Darlings, she said, 'Duchess,' not 'princess,'" and picks up the phone. This was also the only time in which a character that was previously voiced by Eva Gabor has dialogue.

Avatar: The Last Airbending Animal She played as Haru's Mother

Supertiger: The Last Son Of Krypton She played as Lois Lane

The Princess and The Cat Duchess Played as Frog Tiana

Beauty and the Pooh Duchess Played as Belle

She is a gorilla

We're Back!: A Feline's Story Duchess played as Elsa

The Bunny Queen, and The Lola King Duchess played as Pumbaa

The Duchess King, The Alley Cat Queen, and The Female Cat Queen and Duchess played as Adult Simba

Thomas O'Malley of the Jungle Duchess played as Ursula

The Little Mer-Dog Duchess played as Ursula as Vanessa

Danny and Simba (aka: Crash & Bernstein) played as Cheerleader Crash

She is a teen movie star

Frozen (Disney and Sanrio's Animal Style) she played as Elsa

She is a snow queen

She is a longneck

The O'Malley of Notre Dame 2 Duchess played as Madellaine

She is a teacher

she is the leader sailor scout

She is the 2nd Sailor Scout

She is the Third Sailor Scout

Sailor Moon Spoof for 155Movies she Played as

Sailor Andie she Played as

She is the Five Sailor Scout 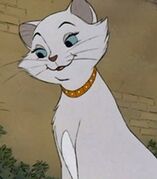 Duchess in The Aristocats 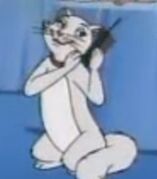 Duchess in House of Mouse

Duchess and Thomas O'Malley as humans 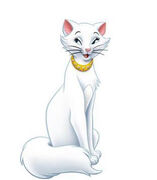 Duchess stuck in the cat door

Duchess in a bikini

Duchess with a scarf on by BASEDCUBE95

Duchess in a gold ballgown by BASEDCUBE95

Duchess as a racer by BASEDCUBE95

Duchess in a blue bikini by BASEDCUBE95

Duchess in a gold bikini by BASEDCUBE95

Duchess in a blue jungle outfit by BASEDCUBE95

Duchess in a gold jungle outfit by BASEDCUBE95
Community content is available under CC-BY-SA unless otherwise noted.
Advertisement