The Parody Wiki
Register
Don't have an account?
Sign In
Advertisement
in: Characters, Animals, South American Animals,
and 7 more

The dusky dolphin (Lagenorhynchus obscurus) is a dolphin found in coastal waters in the Southern Hemisphere. Its specific epithet is Latin for "dark" or "dim". It is very closely genetically related to the Pacific white-sided dolphin, but current scientific consensus holds they are distinct species. The dolphin's range is patchy, with major populations around South America, southwestern Africa, New Zealand, and various oceanic islands, with some sightings around southern Australia and Tasmania. The dusky dolphin prefers cool currents and inshore waters, but can also be found offshore. It feeds on a variety of fish and squid species and has flexible hunting tactics. The dusky dolphin is known for its remarkable acrobatics, having a number of aerial behaviours. The status of the dolphin is unknown, but it has been commonly caught in gill nets. 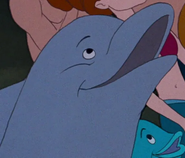 The Little Mermaid (1989)
Community content is available under CC-BY-SA unless otherwise noted.
Advertisement