The Parody Wiki
Register
Don't have an account?
Sign In
Advertisement
in: Animals, Reptiles, Snakes,
and 14 more

The eastern green mamba (Dendroaspis angusticeps), also known as the common mamba, East African green mamba, green mamba, or white-mouthed mamba, is a large, tree-dwelling, highly venomous snake species of the mamba genus Dendroaspis. This species of mamba was first described by a Scottish surgeon and zoologist in 1849. This snake mostly inhabits the coastal regions of southern East Africa. Adult females average approximately 2.0 meters (6.6 ft) in length, and males are slightly smaller. Eastern green mambas prey on birds, eggs, bats, and rodents such as mice, rats, and gerbils. They are shy and elusive snakes which are rarely seen, making them somewhat unusual among mambas, and elapids in general. This elusiveness is usually attributed to the species' green coloration which blends with its environment, and its arboreal lifestyle. However, eastern green mambas have also been observed to use "sit-and-wait" or ambush predation like many vipers, unlike the active foraging style typical of other elapids, which may be a factor in the rarity of sightings. 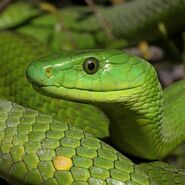