The eastern mole or common mole (Scalopus aquaticus) is a medium-sized, overall grey North American mole and the only member of the genus Scalopus. Its large, hairless, spade-shaped forefeet are adapted for digging. It is native to Canada (Ontario), Mexico, and the United States, and has the widest range of any North American mole. In the United States, the species is found from southern South Dakota and southern Wisconsin to eastern Massachusetts and south to the tip of Florida and Louisiana and west to Nebraska, Kansas, and central Texas. It is absent from the Appalachian Mountains, most of Canada, and northern New England. The species is found in the southern tip of Ontario, and northern Tamaulipas, Mexico. Its distribution, however, is patchy. Colonies in southwestern Texas and Coahuila and Tamaulipas, Mexico, are isolated and small. The species prefers well-drained, loose, sandy or loamy soil, and avoids heavy clay, stony or gravelly soils, and very dry or very wet soils. It frequents pastures, open fields, meadows, and thin woods. In some marginal areas, human activities such as the building of roads and golf courses often provide beneficial habitat due to higher quality soils and adequate moisture The species prefers the loamy soils found in thin woods, fields, pastures, and meadows, and builds both deep and shallow burrows characterized by discarded excess soil collected in molehills. Its nest is composed of leaves and grasses, and its two to five young are on their own at about four weeks. Its diet consists principally of earthworms and other soil life, but the eastern mole will also eat vegetable matter. Dogs, cats, foxes, and coyotes prey upon the eastern mole, and the species hosts a variety of parasites. Unlike gophers, moles do not eat vegetation and pose no threat to human concerns; the occasional damage to lawns is offset by the aeration provided the soil and consumption of insects. The construction of golf courses has provided the mole with ideal habitat. The species is abundant, occurs in protected areas, faces no major threats and is of little concern to conservationists. The eastern mole is a small, sturdy animal which lives principally underground and is highly specialized for a subterranean way of life. Its body is somewhat cylindrically shaped with an elongated head. A fleshy, moveable snout projecting over the mouth with nostrils on the upper part is used as an organ of touch. The minute, degenerative eyes are hidden in the fur; the eyelids are fused and sight is limited to simply distinguishing between light and dark. The ear opening is small and concealed in the fur, but hearing is fairly acute. A short, thick tail is lightly furred and is used as an organ of touch, guiding the mole when it moves backward in the tunnel. The very large front feet are broader rather than long with well-developed claws, and possess a specialized sesamoid bone attached to the wrist that aids digging. The front feet are normally held in a vertical position with the palms facing outward. Both the front feet and the small hind feet are fringed with sensory hairs that help the mole in its excavations. The bones of the front limbs and the breast are hugely enlarged, and provide strong support for the attached muscles used in digging. The hip girdle is narrow, permitting the mole to turn around in its tunnel by doing a partial somersault or doubling back upon itself. The eastern mole has gray-brown, plush-like fur with paler or browner underparts, and may appear to have a silver sheen depending on the angle it is viewed. The fur offers little resistance to backward movement in the tunnel. Compared to the female, the male tends to have a brighter orange strip on the belly being caused by secretion of skin glands in the region. Albinos occur, but these may appear white, orange, or cinnamon-yellow depending on the skin gland secretion. The face, feet, and tail are whitish to pink. Molting occurs in the spring and fall with the new pelage appearing first on the underparts. On the back, the new fur appears first at the tail, then works forward. A distinct line usually marks the old and new fur, and there is no distinct underfur. The hairs are of equal length and, when viewed microscopically, are seen to possess a whip-like tip, unlike the hairs of any other mammal. 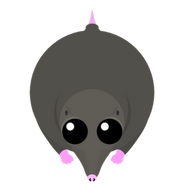