The Parody Wiki
Register
Don't have an account?
Sign In
Advertisement
in: Characters, Animals, Extinct Animals,
and 26 more

Edmontonia was an armoured dinosaur, part of the nodosaur family from the Late Cretaceous Period. It was bulky, broad and tank-like. Its length has been estimated at about 6.6 m (22 ft) and had small, oval ridged bony plates on its back and head and many sharp spikes along its sides. The four largest spikes jutted out from the shoulders on each side, the second of which was split into subspines in E. rugosidens specimens. Its skull had a pear-like shape when viewed from above. Its neck and shoulders were protected by three halfrings made of large keeled plates. 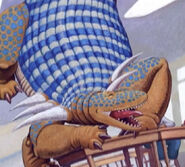