Start a Wiki
Edmontosaurus is a genus of hadrosaurid (duck-billed) dinosaur. It contains two known species: Edmontosaurus regalis and Edmontosaurus annectens. Fossils of E. regalis have been found in rocks of western North America that date from the late Campanian stage of the Cretaceous Period 73 million years ago, while those of E. annectens were found in the same geographic region but in rocks dated to the end of the Maastrichtian stage of the Cretaceous, 66 million years ago. Edmontosaurus was one of the last non-avian dinosaurs, and lived alongside dinosaurs like Triceratops and Tyrannosaurus shortly before the Cretaceous–Paleogene extinction event. 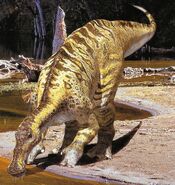 Add a photo to this gallery
Retrieved from "https://parody.fandom.com/wiki/Edmontosaurus?oldid=2232035"
Community content is available under CC-BY-SA unless otherwise noted.