The Parody Wiki
Register
Don't have an account?
Sign In
in: Pages with reference errors, Foxes, Brown Characters,
and 62 more

Eevee (Japanese: イーブイ Eievui) is a Normal-type Pokémon introduced in Generation I. It evolves into one of eight different Pokémon through various methods:

Eevee is the starter Pokémon for the main characters of Pokémon XD: Gale of Darkness and Pokémon Conquest. It is also the rival's starter Pokémon in Pokémon Yellow, although Professor Oak originally intended to give it to the player. 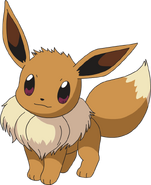 Eevee and Eievui are the pronunciations of E-V, the first two letters in the word evolution.