The Parody Wiki
Register
Don't have an account?
Sign In
Advertisement
in: Characters, Animals, African Animals,
and 34 more

A small vulture with a very large range, the Egyptian vulture (Neophron percnopterus) has an unmistakable appearance. Adults have largely white to pale grey plumage, which contrasts markedly with the black flight-feathers and the bold yellow bare skin on the face. The long, narrow bill has a yellow base and terminates with a black tip. The tail is short and wedge-shaped. The legs may be greyish-white, pink or pale yellow. Juveniles have much darker plumage than the adults, and may be grey-brown, brown or blackish-brown. 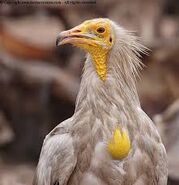 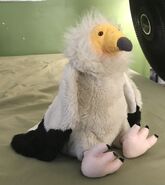