Elaris is a support character in the Ratchet & Clank 2016 re-imagined game and the Ratchet & Clank movie. She is the technical support of the Galactic Rangers, who designs their gear and provides tactical support via the communication station. She served as the brains of the Rangers, and preferred to think plans through before putting them into action, though Captain Qwark and the other Rangers often paid her little notice. During missions, she often stayed behind in the Starship Phoenix, providing tactical support from a distance. 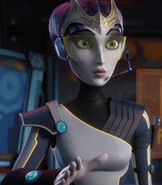 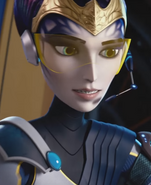 Add a photo to this gallery
Retrieved from "https://parody.fandom.com/wiki/Elaris?oldid=1831052"
Community content is available under CC-BY-SA unless otherwise noted.