The Parody Wiki
Register
Don't have an account?
Sign In
Advertisement
in: Characters, Animals, South American Animals,
and 98 more

The emerald tree boa (Corallus caninus) has a large, bulky head that is clearly distinguished from the much thinner neck. The back of the head is defined by two fairly large bulges on either side that contribute to the bulkiness of the head. These bulges may be used as an energy reserve as emaciated individuals often lose these bulges. The bulges slope forward to a snout that is angled such that the lower jaw appears to be shorter than the upper jaw. Found in South America in the northern region of Colombia, Brazil, and from Venezuela to Suriname and the Guianas within the so-called Guiana Shield. 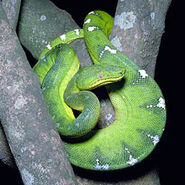 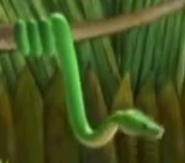 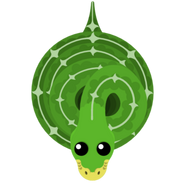 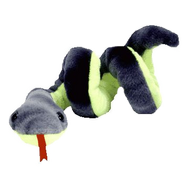