Emojie is a peach mouse-deer with dark markings on her back who is actually very emotional and intense, but is mostly happy. She wears a small purple bow and a yellow mask with an emoticon that always changes depending on her emotion. She also has her own pumpkin, which is actually carved and shows what her current face looks like. Her size is quite smaller than normal tree friends but not as small as Cub.

As her name suggests, Emojie is a very emotional and intense character. Emojie's personality always completely changes and follows her current emotion. She mostly can be seen as either being very happy, very sad or very angry but being happy is her main emotion.

Everyone might really enjoy getting along with her and try to not mess with her emotion since she will do something unexpected to anyone if she's in the bad mood. Her activity is sometimes very random, unexpected and sudden. For example, she suddenly appears in a scene and screams for an unknown reason. She often makes everyone shocked by her sudden activity.

The bad side of Emojie is when she is in her bad mood, as she will do something bad to anyone, mostly killing. No one can predict what her next move is since she'll always do it randomly. She can be the pretty bad one and would injures people more or overkill if her mood is pretty bad than usual.

She wears a mask as she actually wants to hide her actual face from others because her face is actually almost ruined and destroyed by someone(which is revealed in Attention Seeker), which made her face look ugly. Her pumpkin actually shows what happened to her face. One of her eyes is actually blind because of that one incident. She tries to avoid anyone seeing her current face and ignores all questions about her face.

Emojie can also talk to ghosts or spirits and befriend them. No one ever sees how Emojie changes the "emotion" on her mask since it happens very quickly and off-screen. She might have a small psychic ability and use it for some reasons silently. Her ability sometimes strong depends on her mood, similar what she did in Attention Seeker. 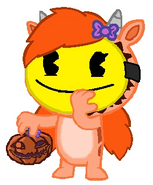 (Credit Goes To The Happy Tree Friends Fan On Wikia) 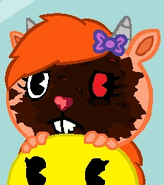 (Credit Goes To The Happy Tree Friends Fan On Wikia)

Retrieved from "https://parody.fandom.com/wiki/Emojie?oldid=2078423"
Community content is available under CC-BY-SA unless otherwise noted.