The Parody Wiki
Register
Don't have an account?
Sign In
Advertisement
in: Dragon Tales Characters, Characters, Main Characters,
and 18 more

Enrique, voiced by Aida Ortega, is six years old and is Emmy and Max's new friend who moved to the U.S. from Colombia. He first appears in the beginning of Season three and travels to Dragon Land with the children. His recent experiences in South America provide more opportunities for the characters to demonstrate the meaning of new Spanish words, much like Dora the Explorer. He rides with Zak and Wheezie, the two-headed dragon who rarely flew with any human friends until Enrique's debut.  Enrique's favorite color and age are unknown.

He played Tim Templeton in The Boss Baby spoof for 190Movies 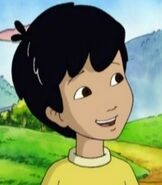