Esmeralda de Châteaupers is the deuteragonist in Walt Disney's 34th animated classic, The Hunchback of Notre Dame and a minor character in its less successful 2002 direct-to-video sequel. She is a streetwise, free-spirited, tough, sweet, kind, compassionate, gentle, and beautiful gypsy woman who is able to look inside other people's hearts beyond their appearances. She is the wife of Phoebus, Quasimodo's friend, and Zephyr's mother. In the franchise, she is voiced by Demi Moore while the mysterious Heidi Mollenhauer provided her singing voice (though she didn't sing in the sequel).

She is Andrew's foster mother

Esmeralda played Faloo in The Rescuers Down Under (Coolzdane Human Style)

She is a kangaroo

She is an Indian princess

She is a farmer's wife

She is a mother of three

Esmeralda played Horton the Elephant in Esmeralda Hears a Princess

She is a elephant

She is a queen

She is a mother

Esmeralda played Looti in The Princess and the Goblin King

She is a nanny

She is an elderly lady

She is an elephant

She is a saluki

She is a member of The Heathers, and the secondary antagonist

She is a pig and one of the protagonistst

She is a teacher

She is a member of the Plastics

She is a Singer

Esmeralda will play Kira in Disney's The Dark Crystal

She is a Gelfling and the female protagonist' 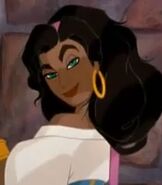 Esmeralda in The Hunchback of Notre Dame 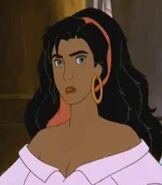 Esmeralda in The Hunchback of Notre Dame 2 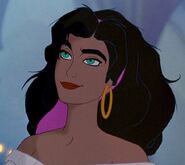 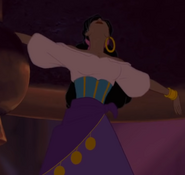 Add a photo to this gallery
Retrieved from "https://parody.fandom.com/wiki/Esmeralda?oldid=2438457"
Community content is available under CC-BY-SA unless otherwise noted.