The Parody Wiki
Register
Don't have an account?
Sign In
Advertisement
in: Characters, Animals, Cretaceous Animals,
and 24 more

Euoplocephalus is one of the largest genera of herbivorous ankylosaurian dinosaurs, living during the Late Cretaceous of Canada. It has only one named species, Euoplocephalus tutus. Euoplocephalus was about five to six meters long and weighed over two tons. Its body was low-slung and very flat and wide, standing on four sturdy legs. Its head had a short drooping snout with a horny beak to bite off plants that were digested in the large gut. Like other ankylosaurids, Euoplocephalus was largely covered by bony armor plates, among them rows of large high-ridged oval scutes. The neck was protected by two bone rings. It could also actively defend itself against predators like Gorgosaurus using a heavy club-like tail end. 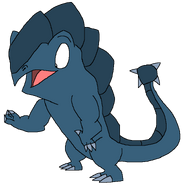