The European nightjar (Caprimulgus europaeus), Eurasian nightjar or just nightjar, is a crepuscular and nocturnal bird in the nightjar family that breeds across most of Europe and temperate Asia. The Latin generic name refers to the old myth that the nocturnal nightjar suckled goats, causing them to cease to give milk. The six subspecies differ clinally, the birds becoming smaller and paler towards the east of the range. All populations are migratory, wintering in sub-Saharan Africa. Their densely patterned grey and brown plumage makes individuals difficult to see in the daytime when they rest on the ground or perch motionless along a branch, although the male shows white patches in the wings and tail as he flies at night. 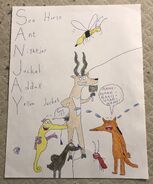 Add a photo to this gallery
Retrieved from "https://parody.fandom.com/wiki/European_Nightjar?oldid=2131193"
Community content is available under CC-BY-SA unless otherwise noted.