The Parody Wiki
Register
Don't have an account?
Sign In
Advertisement
in: Characters, Animals, European Animals,
and 41 more

The elusive European otter (Lutra lutra) has sleek brown fur, which is often paler on the underside, and a long lithe body with a thick tail and short legs. Adaptations for an aquatic lifestyle include webbed feet, the ability to close the small ears and the nose when under water, and very dense, short fur which traps a layer of air to insulate the animal. Many sensitive hairs ('vibrissae') frame the snout; these help the otter to locate prey. The vocalisations of the European otter include a high-pitched whistle between a female and her cubs, twittering noises produced during play-fighting and cat-like noises when fighting. 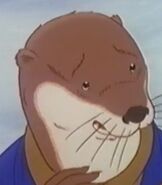