The Parody Wiki
Register
Don't have an account?
Sign In
Advertisement
in: Pages with broken file links, Characters, Animals,
and 34 more

The European robin (Erithacus rubec​ula) is undoubtedly one of Britain's most dearly loved birds. It is instantly recognisable due to the rusty-red breast; indeed, 'Robin redbreast' and simply 'redbreast' are well-known alternative names. The sexes are very similar, but juveniles lack the red breast and are mottled with browns and buffs. The robin is one of the few birds to sing throughout the winter; its melodious, liquid song is a further feature that has endeared this species to the public. A call is also produced. The robin is one of the few birds which can be heard singing during the winter. A feisty and territorial species, male robins will aggressively drive intruders away and often hold the same territory throughout their life. The robin is known for nesting in unusual places, including old teapots, jacket pockets, and on shelves in buildings. In the UK, robins are closely associated with Christmas, possibly because the first postmen wore bright red waistcoats, and were popularly known as 'Robins'. 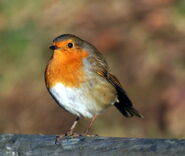 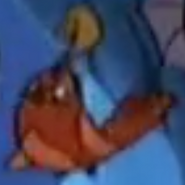