The Parody Wiki
Register
Don't have an account?
Sign In
Advertisement
in: Female Characters, Deers, Heroines,
and 22 more

Faline is a Whitetail Deer Fawn in Bambi.  She's Marie (The Aristocats) Bestfriend

In Walt Disney's animated film Bambi, Faline is about Bambi's age, give or take a week or two, but in both Bambi and Bambi II her personality is considerably more mature than his (granted, her first appearance is the exception that makes the rule). It is she who always makes the first move, whether in mere play (as a fawn) or in romantic pursuits (as an adult). The way this is so, however, shifts as she grows older. When they first meet, she comes across as a cute, wild, giggly little girl, an image which puts Bambi on the run until he finally manages to get a lock on her location after she steals one kiss too many from him. When we see her next, again in the first movie, she is a beautiful, fully grown and very attractive doe and has progressed to the point where she makes her moves with what comes across as a thoroughly deliberated strategy, with the possible implaction that she had been watching Bambi for some time, waiting for the perfect moment to make her approach. The lighter coloring she showed as a fawn is back and (predictably) she still has Bambi on the run. Luck and love are with her though, and this time she finally manages to catch him. She and Bambi fall in love together in the meadow during a night. Although she appears dependent on him, with Bambi rescuing her from both unwanted suitor Ronno and hunting dogs, she does have a degree of resourcefulness, as shown by her rock climbing to escape the dogs and the fact that she made her way to a safe place after the fire. Here we see her awaiting Bambi anxiously. The only time we see her looking truly calm is when she is seen at the end of Bambi with her and Bambi's twin fawns. It has been postulated that this was because, as she was now a mother, Walt and the animators decided it was only suitable that she be shown in the traditional image (for that time period) of one. Admittedly, the fact that she has just given birth to twins may also play a part.

Faline's overall image is somewhat different in Bambi II. For one thing, she has slightly darker coloring (she went back to lighter coloring when she grew up). She still has a huge crush on Bambi and even surprises him, making him touch his nose on hers. The darker coloration would seem to go with the idea of her edge in maturity over Bambi, although this is contrasted by the fact that she is the only fawn who doesn't lose her spots in the course of the movie. She seems to have settled down a bit. She still giggles, but not so wildly as before. Furthermore, she is at a rather independent stage. In an attempt to placate Ronno after she and Bambi first meet him, and possibly to spend more time with Bambi, she suggests to Ronno 'yeah, maybe you should get going' after Ronno's mother begins to call him away. Later in the movie, she makes a face at Bambi's attempt at a growl (Bambi was trying to ward off Ronno). Bambi's attempt at a growl, according to most viewers, sounds like a bleating lamb, which is probably why it was not very successful for intimidation. That is not enough, however, to alter her preferences; she still clearly prefers Bambi's company to Ronno's. Unfortunately, Ronno pays little mind to what Faline thinks, and when he tries to force her to go with him Faline tries to stand up for herself, unlike a similar event in the first movie, when she immediately called to Bambi for help. It is hard to say who is most surprised in this movie when Bambi tells Ronno to leave Faline alone: Faline, Ronno, or Bambi himself. Unlike in the first movie Faline makes no attempt to steal a kiss from Bambi. However, as her luck would have it, she doesn't need to this time. Faline is now a teenager along with Bambi. A grumpy porcupine with a grudge against Bambi takes revenge by pricking Bambi in the hind legs, making Bambi leap forward and accidentally engaging Faline in a kiss (standing face to face). After a few moments of stunned silence, Faline gives a quick smile. Bambi stumbles backwards, stuttering uncontrollably and not knowing what to say (leaving viewers to decide his exact opinion of the incident), whereas Faline unsuccessfully tries with limited success to suppress facial expressions of silent joy, moving her head close to her body and smiling with her eyes closed, treasuring the incident. They then look lovingly (smiling) at each other. Faline moves her head little closer at Bambi getting the chance of touching his nose. But Ronno interrupts the scene to swear revenge (Bambi and Faline still standing close to each other).

When Thumper complains that Bambi never has time for his friends anymore, now that he is busy spending time with his father, Faline's heartfelt opinion of the matter is, "Yeah. Isn't it wonderful?". While talking, Faline smiles her eyes opening closing and stop almost closed, showing that her crush on Bambi increased after the kiss.

Faline plays Sylvia in The Return of Kermit

She is a russian

Faline plays Princess Rosella in Faline As The Island Princess 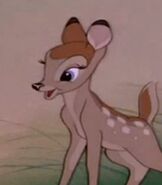 Bambi Found Faline She So Cute 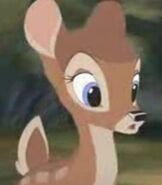 Faline is Look Is He Okay