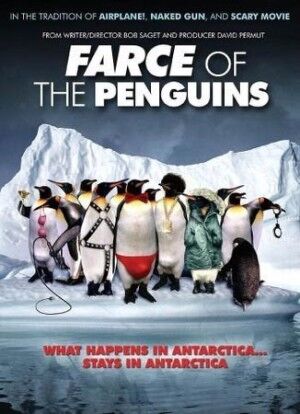 Farce of the Penguins is a 2007 American direct-to-video parody of the 2005 French documentary film March of the Penguins. The film features Samuel L. Jackson as narrator, with the two main characters voiced by Bob Saget (who also wrote and directed the film) and Lewis Black. Five of Saget's former Full House co-stars also lent their voices to the film. Other additional voices were provided by Tracy Morgan, Christina Applegate, James Belushi, Whoopi Goldberg, Dane Cook, Abe Vigoda, Mo'Nique, and others.

Samuel L. Jackson narrates the story about a group of male penguins that make a 70-mile trek to go to their breeding grounds where females are waiting to have sex with them. These penguins include Carl (Bob Saget) and Jimmy (Lewis Black), two friends who talk about relationships and other things as they meet new characters including Marcus (Tracy Morgan), a penguin who likes to kid around and brag about his huge penis (an illogical point, since penguins do not have penises and instead have cloacas), and Steve the snowy owl (Jonathan Katz), who gives Carl advice on his life in a Freudian kind of way while billing him for the two quick sessions. Meanwhile, Melissa (Christina Applegate) and Vicky (Mo'Nique) argue about men and other women who bother them as they wait for their mates to arrive at the breeding grounds.

Retrieved from "https://parody.fandom.com/wiki/Farce_of_the_Penguins?oldid=651613"
Community content is available under CC-BY-SA unless otherwise noted.