Princess Fine  (ファイン; Fain) is the main protagonist of Fushgiboshi no Futagohime and one of the twin princesses of the Sunny Kingdom along with her sister, Rein. She is known as one of "the most unprincess-like princess since the beginning of the Mysterious Star".

Fine is a warm-hearted girl and cares deeply for her friends and family and later Shade. She is very cheerful and optimistic. Another quality of hers is her talent in athletics, dancing being her only weakness in it. Fine is also very gluttonous - the first thing she thinks about when she goes to parties is usually food. Unlike her sister, she is scared easily, especially by ghosts.

Fine doesn't mind losing the Princess Parties so long as she can make those around her proud.

Although Fine is similar in some aspects she does have differences between her anime and manga counterparts.

She was the first one to open up to Eclipse/Shade, believing that he was "not a bad guy".

She and Shade are the only ones who can understand Milky when she speaks. Poomo claims that this is probably because they both love to eat.

Fine seems to be a bit more sensitive than her anime counterpart. When the Sky Dragon was lashing out and Bright said he may need to mobilize the Jewelry Kingdom army Fine spoke out and cried, saying that the dragon was only like this because it was suffering. At the time, she was the only one who noticed its suffering.

Sometimes she becomes scared to the point that she's unable to do anything, however, she can shake out of it pretty quickly if Rein is endangering herself, showing how much she cares for her sister.

Although she was scared, when she noticed Rein jump off of the Jewelry Airship and Poomo told her that Rein was in danger of her magic wearing off, she tried to jump off herself to save her sister.

Fine also refers to Rein as her "better half" in the manga, showing just how much she respects and loves her sister. 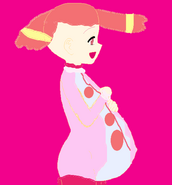 Oh, Fine, please don't tell me you ate your sister...

Fine and Rein as Fortune Princesses

Rein and Fine as Universal Princesses

Grand Pararira
Add a photo to this gallery