Finn is the main character from Adventure Time.

He played Mowgli in The Jungle Book (Baddwing Style)

He was a detective from the homicide group. However, he was temporarily covered up by his partner Jake The Dog in Episode 1 of the 5th Season Thrill Kill as he was the director for a day (for the past scenes) and because of the conflict crossline made by his voice actor Jeremy Shada which previously appeared on the same episode in the real series. 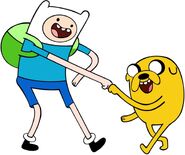 Finn's friend: "Dandy"
Add a photo to this gallery
Retrieved from "https://parody.fandom.com/wiki/Finn_(Adventure_Time)?oldid=2381726"
Community content is available under CC-BY-SA unless otherwise noted.