Flaky is one of the main characters of Happy Tree Friends and a playable character in the False Alarm video game and Deadeye Derby.

Flaky is a red porcupine whose quills are full of white flake-like dandruff, thus her name. She's one of the most popular characters in the series and she has the identifiable personality of a very cautious and timid character, which is understandable considering that Happy Tree Friends live in constant danger of being brutally killed.

Flaky is often seen as a coward and very shy in many cases. However, some of Flaky's actions in both the internet episodes and the TV series go against this, as she has been brave and on several occasions saved her own life. Flaky is actually one of the kindest characters on the show, doing things like saving a baby bird in Take a Hike. She's often seen around Lumpy, Sniffles, and Cuddles. Additionally, when hanging around with Cuddles, Flaky is often forcefully dragged into situations that lead to one or both of their demises, despite her warning Cuddles about possible dangers that could occur. This is seen in Water You Wading For, Let It Slide, and The Wrong Side of the Tracks.

Flaky seems to be somewhat mentally unstable, as seen in the episode Snow Place to Go. Near the end of the episode, she begins to go insane and treats a garden gnome as her companion, singing a lullaby to it after being trapped in the Arctic with no food or civilization. This is also seen in Without a Hitch, where she suffers from fear-induced hallucinations over the course of the episode, culminating in her stabbing Flippy in the eye in imagined self-defense when Flippy pulls out a knife.

The episode Party Animal reveals that she's allergic to peanuts, as they give her a purple rash, big lips, and make her bloat up like a balloon. She's also prone to vomiting, usually triggered by her fear of heights and/or flying, as seen in Wingin' It.

The fact that she's a porcupine often causes trouble - her quills often impale other characters and destroy objects unintentionally. Flippy once even used her as a weapon to kill Cuddles with in Keepin' it Reel. They also sometimes lead to her being skinned, specifically in Class Act and Let It Slide, when she falls down a tight space, causing her quills to get caught on the way down, ripping her skin and fur off. When she comes out the other end, her muscles are exposed.

Her excessive dandruff has sometimes been exploited by other characters. In the Second Serving DVD, it was given its own breakfast cereal called Flaky Flakes, which resemble Cornflakes with red and white pieces mixed in. Her dandruff is also used to create a snowing effect for a play in Class Act. A running gag in the series is that whenever she runs, shakes, or is struck by something, her dandruff falls out.

A small portion of Flaky's kills were done after she had been killed. In the episode Rink Hijinks, when Disco Bear carelessly pushes her, she falls onto Lumpy's floor buffer, causing her quills to fly out of control and pierce Disco Bear to death, along with indirectly being responsible for Lumpy getting stuck in the crane machine. In Party Animal, after she gets popped like a balloon by The Mole, her quills pin it to the wall. In Let It Slide, she causes all of the bolts in a slide to fall out slicing Cuddles in half when she slides down. In Ski Ya, Wouldn't Wanna Be Ya!, she indirectly gets Disco Bear killed by a nail in a piece of wood and (debatably) kills Giggles and Petunia with an avalanche she caused. So far the only characters she has killed without her being killed first are Cuddles, Mime, Lifty, Shifty, Handy, and Flippy.

Flaky Played Mrs. Boyil in The Upside Down Show

Flaky played Rarity in My Little Family: Friendship is Happh The Canerlot Wedding 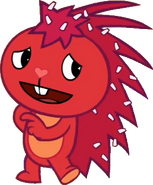