The Parody Wiki
Register
Don't have an account?
Sign In
Advertisement
in: Characters, Animals, South American Animals,
and 10 more

The flightless cormorant (Phalacrocorax harrisi), also known as the Galápagos cormorant, is a large, blackish coloured bird. The tiny, scruffy-looking wings indicate the flightless habit of the species. This species is the only flightless cormorant and the heaviest member of the family. Like other flightless birds, the sternum (breastbone) has lost the pronounced keel, which in most birds is the site of attachment for the well-developed flight muscles. In fact, this species is so different to other cormorants, that some experts place it in a separate genus (Compsohalieus). The upperparts of the flightless cormorant are blackish and the underparts are brown. The long beak is hooked at the tip and the eye is turquoise. Like all members of the cormorant family, all four toes are joined by webbed skin. Males and females are similar in appearance, although males tend to be much larger. Juveniles are generally similar to adults but differ in that they are glossy black in colour with a dark eye. Adults produce low growling vocalizations. 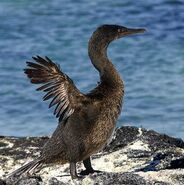 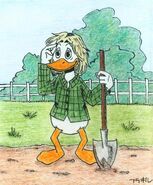