Flora is a yellow steam tram who works for Sodor Tramways in Great Waterton. She has her own tram car, which is her pride and joy.

Flora was new to the railway when Thomas first met her. The Fat Controller told Thomas to introduce Flora to Toby, as she was to lead an engine parade at Great Waterton with him. Thomas was worried that Toby would be upset that he was not the only steam tram on Sodor anymore, and tried to detour Flora until Toby left for Great Waterton. Flora ran out of coal near Toby's shed and Toby saw the bright yellow tram for the first time. To Thomas' surprise, Toby was delighted to see her. Thomas lent Flora his coal, and she and Toby went to Great Waterton in time for the parade - Flora also received her very own tram car right before the parade began.

Flora is a docile little steam tram working on the Island of Sodor. She mainly works the Great Waterton Tramway with her tram car, which is her pride and joy, that she uses to perform passenger duties. Although she is, at times, quiet or even timid, she often greets other engines with a sunny smile. She is always cheerful to work, but she can be concerned about speaking up right away if there is a problem. She is happy to work on Sodor and is warmly fond of Toby, Sodor's other steam tram. They even led the first annual Great Waterton parade together, not long after meeting each other.

According to the Official Website, Flora is based on a 1904 Moseley Road Tramway steam tram from Birmingham, rebuilt into standard gauge from 3ft 6in gauge. Instead of buffers, she has three couplings upon her front and rear bufferbeam. Several different types of trams were supplied to the tramway, and Flora appears to be a hybrid of a Falcon and a Kitston tram, though her build date would make her a Kitston tram. All Moseley Road steam trams were withdrawn on 31 December 1906 in favour of electric trams, with none surviving to preservation.

Flora is painted yellow with green and white lining, red cowcatchers and sideplates, and green boards on her roof reading "SODOR TRAMWAYS" in white. She has red nameplates with her name in gold on her sides. 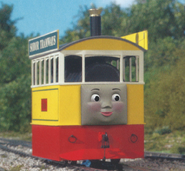 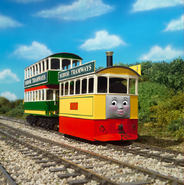 Flora as a baby