The Parody Wiki
Register
Don't have an account?
Sign In
Advertisement
in: Characters, Animals, Manatees,
and 15 more

The Florida manatee (Trichechus manatus latirostris) a subspecies of the West Indian manatee, is a large, slow-moving marine mammal with an elongated, round body and paddle-shaped flippers and tail. Manatees are herbivores, feeding solely on seagrass, algae and other vegetation in freshwater and estuarine systems in the southeastern United States. Florida manatees can be found as far west as Texas and as far north as Massachusetts during summer months, but during the winter, manatees congregate in Florida, as they require warm-water habitats to survive. Abundance of the subspecies has increased over the last 30 years, which recently prompted the U.S. Fish and Wildlife Service (FWS) to downlist the West Indian manatee from endangered to threatened. However, due to their slow speed and relatively high buoyancy, manatees are often struck by vessels, which is the primary cause of human-related deaths of the species. Additionally, manatees continue to be threatened by loss of warm-water habitat and periodic die-offs from red tides and unusually cold weather events. Florida manatees are managed jointly by both FWS and the Florida Fish and Wildlife Conservation Commission (FWC). 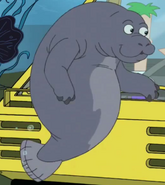 Phenias and Ferb (2007-2015)
Community content is available under CC-BY-SA unless otherwise noted.
Advertisement