Flotsam and Jetsam were the moray eel minions of the sea witch Ursula They appear as the secondary antagonists in the film "The Little Mermaid" and the prequel television series. They were both voiced by the late Paddi Edwards in the film.

Flostam play Mr. Chairman in Ocean Tunes: Back in Action

Flotsam and Jetsam play Jasper and Horace in 101 Animal kids

They're theives and Jafar's former henchman 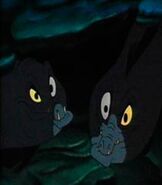 Add a photo to this gallery
Retrieved from "https://parody.fandom.com/wiki/Flotsam_and_Jetsam?oldid=2481407"
Community content is available under CC-BY-SA unless otherwise noted.