Freddi Fish is a gold fish of and the third main character created by Humongous Entertainment. She is Humongous' first female character, and has been in a total of eight games since her creation in 1994. Freddi is known for her intelligence and skill as a junior detective. Her best friend is a little green fish named Luther. She was voiced by Annette Toutonghi.

Freddi Fish as she appears now 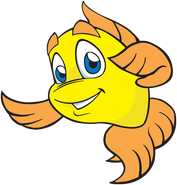 Sam and Freddi in telescope from Putt-Putt Saves the Zoo

Freddi and Luther in 3D

After receiving flowers from her pelican friend Sam, Freddi delivers them to Jason/Snappy Turtle and Grandma Grouper. Grandma Grouper informs her of the theft of her kelp seed treasure, which would eventually lead to starvation due to her kelp garden already dying already. She soon meets Luther practicing his loop-de-loops. They discover a bottle with a note inside which are clues leading to the treasure. They eventually discover the treasure in the sunken ship and (after making an agreement with the sharks who stole the treasure) share it with everyone.

A Ghost at the Schoolhouse

Freddi meets Luther on his way to school. Luther shows her his Codfish Commando action figure for show and tell. When they arrive at school, they discover the guppies are frightened by a ghost who steals their toys. Freddi claims there are no such things as ghosts. After the ghost attempts to steal Luther's action figure and Luther retrieves his stolen action figure in the school's basement, Freddi discovers the "ghost" is only a costume due to part of the ghost being torn off. She plans a trap to catch the ghost and finds the necessary parts. The ghost gets caught in the trap and Freddi scolds the sharks for stealing the guppies' toys. She and Luther return the toys to the guppies and the class celebrates.

Luther is invited by his Uncle Blenny and brings Freddi along. They arrive at the conch festival with Sam's help. When they arrive at the festival, they found out Blenny is framed for the theft of the Golden Conch. Freddi decides to help Blenny clear his name by finding the three Golden pipes for Soggy to sniff out. After being led to the ruins, Freddi must free Luther after he gets stuck in a trap. Freddi retrieves the bag and uses the evidence to expose the real thief.

Freddi and Luther are invited to Freddi's cousin Calico's Ranch. When they arrive at cousin Calico's Ranch, they discovered that her hogfish have been rustled. Freddi and Luther head to the town square, the wild west town, in search for clues to find the rustlers. After arriving at the abandoned safe, they meet up with the first rustler, a slim fish dressed in `what the well dressed rustlers are wearing`. He then says that since Freddi and Luther aren't wearing these things, they mustn't be rustlers. Freddi and Luther must search all over town square to find a ten gallon hat (dyed in a different color each game), a belt and a belt buckle (different letter each game), and either a bandana or hankerchief accessory. Then they can get in the safe in order to liberate the hogfish. The two detectives need to find out who Mr. Big is and start hogfish ranching.

Freddi and her best friend Luther have to figure out what's going on with Coral Cove Park. The mayor wants to open it as a tourist attraction, but it seems to be inhabited by a sea monster. Freddi and Luther investigate why the sea monster is scaring the citizens. The sea monster was driven out Coral Cove Park by a greedy developer, Marty. The two detectives knew that Marty was missing as well. They must find the hidden deed and the mayor arrest Marty for theft. The townsfolk can enjoy the park while Marty does the dirty work.

Freddi is a bright and yellow goldfish with orange fins. She has blue eyes which are always full of life. She is also able to hide objects of greatly varying sizes under her fins, like Pajama Sam and his cape.

Retrieved from "https://parody.fandom.com/wiki/Freddi_Fish?oldid=2081025"
Community content is available under CC-BY-SA unless otherwise noted.