The Parody Wiki
Register
Don't have an account?
Sign In
Advertisement
in: Characters, Males, Lovers,
and 41 more

Freddy Fredlin is a flamingo and one of the two main characters in the Disney Junior animated series T.O.T.S.. He is a T.O.T.S. baby deliverer and Pip's best friend and partner.

Freddy really loves his job in T.O.T.S. and loves it more when comes to delivering babies.

Freddy is a coral pink flamingo with dark yellow irises and a golden yellow beak with a black tip. Freddy wears his T.O.T.S. uniform, which is a blue shirt with white buttons. He also wears a light blue cap and smelly navy blue sneakers like rotten eggs. When he goes to sleep, he wears pajamas and a nightcap. 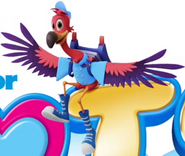