The Parody Wiki
Register
Don't have an account?
Sign In
in: Heroes, Ghosts, Male Heroes,
and 25 more

Back to page
View source

"My children. From the very beginning, it was the children who gave me my power. The Springwood Slasher, that's what they called me. My reign of terror was legendary. Dozens of children would fall by my blades. Then the parents of Springwood came for me. Taking justice into their own hands. When I was alive, I might have been a little naughty, but after they killed me, I became something much, much worse. The stuff nightmares are made of. The children still feared me and their fear gave me the power to invade their dreams. And that's when the fun REALLY began."
―Freddy Krueger

Frederick Charles "Freddy" Krueger, known simply as Freddy Krueger, is a legendary serial killer and the main character of the 1984 classic horror film A Nightmare on Elm Street. He was a sadistic child murderer in his life, and when vengeful parents found out, they burned him alive in his boiler room hideout. Unbeknownst to them, Freddy made a deal with three "Dream Demons" and was resurrected as a malevolent spirit, seeking revenge on the parents of Springwood, Ohio by killing their children in the one place where they couldn't protect them; in their dreams, usually with his signature clawed glove.

In April 1941, a young girl was accidentally locked in the sanitarium of Westin Hills Psychiatric Institute in Springwood over the holidays. The inmates kept her hidden for days. She was raped... hundreds of times. When she was found, she was barely alive. That girl was Amanda Krueger, her child was Freddy - the bastard son of a hundred maniacs.

Frederick Charles Krueger was born in February 1942 and was shifted from one foster home to another throughout his childhood, learning nothing but torment and hatred along the way.

Called Freddy, he was constantly ridiculed for his infamous and brutal conception. It was then he started murdering small animals, and as he grew into adulthood, he turned his masochistic behavior on himself. After suffering abuse from his stepfather for many years, he brutally murdered him with a razor.

Freddy finally returned to his hometown of Springwood and was disgusted to see the picture of a perfect town, full of happy families in their tidy homes. With that jealousy and disgust building up inside him Freddy became one of the most notorious child-killers alive. Finding employment maintaining the boilers at an old steam-plant on the outskirts of town, Freddy would settle down and have a family of his own, all the time plotting his revenge upon life itself.

Whilst working in the plant he went on to construct the first of his imfamous 6 inch bladed gloves. Made from and old glove and four razor sharp blades that he attached to the glove with interlocking metal sections and rivets he began his killing spree, known as the Springfield Slasher. From 1975-1977 he kidnapped and murdered 23 children.

Freddy's downfall came when his wife discovered the bladed glove and a multiple of newspaper clipping about the child murders in their basement. Despite her tearful assurances that she would not tell what she knew, the paranoid Freddy would go on to throttle his wife in front of his horrified daughter.

Soon afterwards, Freddy was arrested and charged with the murders of his wife and the missing children of the town. However, in their haste, the bungling officers forgot to read Freddy his rights, he was unexpectedly freed on a technicality.

Seeing the threat he posed, the court placed his daughter in an orphanage.

The enraged parents of Springwood, OH then took the law into their own hands. They followed Krueger to a building where he took his victims and ignited it with gasoline into a raging inferno. However, no one expected the end result of this act. Freddy's soul was so corrupt that it was decided he could be of use to dream demons imprisoned in hell. When he was promised eternal life in the world of dreams, Freddy could hardly refuse. Ever since that night, Krueger has taken his revenge on the parents of Springwood by stalking their children through their dreams. Each time he is able to twist what would seem to be a normal dream into his own brutal imagination's delight of terror. Some children have escaped thinking they have defeated him, only to have him rise again sometime later. There is only one documented case of Krueger meeting his match. While in hell, he was able to awaken Jason Voorhees, of Camp Crystal Lake infamy. Freddy was then able to use Jason to strike fear into the kids of Elm Street. This plan backfired when the masked killer could not be shut down. This led to a big confrontation both in the dream and real world. Freddy still lingers in the pits of hell with no indication if or when he will return.

Fred Krueger is a more dark and sinister being that keeps the jokes to a minimum. He still has some humor, but he mainly scares his victims-to-be. In life, he was the care taker of a small pre-school who loved to play with the children. When some children began to talk of him doing horrible things to them in the school basement, the parents were enraged. They formed a lynch mob and went to after him. He had fled the school and the parents eventually caught up with him, chasing him down to an abandoned factory and burning him alive. He tries to get the former children, now teens, to remember him by haunting them in their sleep. Once they are their weakest, he kills them as they drift off to sleep. When Nancy Holbrook and Quentin Smith are the only Elm Street kids left, they begin to do research to figure out who this evil dream man really is. They find the abandoned, run-down pre-school and the hidden "cave" which was a crawl space. It was where Fred would take the children and do awful things to them. Nancy found pictures of herself as a child in the hidden room.

Though it was never blatantly stated in the original movie series, Freddy is officially declared a child molester in this retelling. Nancy and Quentin decide to pull Freddy out of the dream realm in order to kill him once and for all. Nancy slices Freddy's neck after a struggle and it presumably kills him. She then sets the basement of the school on fire and gets out with Quentin. Later on, the firefighters say that there was no sign of a body. Nancy and her mother are back at home, but Freddy jumps out of the mirror impaling the mother with his glove and pulling her back through to his realm.

In The Short Films

"Krueger: Tales from Elm Street" Series: Freddy Krueger is shown in life as a child molester / child killer who hides in the every day suburban life of the town of Springwood. His neighbors think he is a doting husband and father, but beneath that disguise he secretly stalks their children. After abducting several children, he is caught and interrogated by Lt. Donald Thompson who, lacking evidence, attempts to get Krueger to confess.

"The Nightmare Ends on Halloween" Series: Freddy Krueger is also featured in an epic battle for his soul and powers with Jason Voorhees, Michael Meyers, Leatherface and Pinhead. 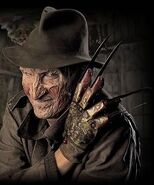