The Parody Wiki
Register
Don't have an account?
Sign In
Advertisement
in: Characters, Animals, Ocean Animals,
and 24 more

The frilled shark (Chlamydoselachus anguineus) is one of two extant species of shark in the family Chlamydoselachidae, with a wide but patchy distribution in the Atlantic and Pacific Oceans. This species is found over the outer continental shelf and upper continental slope, generally near the bottom, though there is evidence of substantial upward movements. It has been caught as deep as 1,570 m (5,150 ft), although it is uncommon below 1,200 m (3,900 ft). In Suruga Bay, Japan, it is most common at depths of 50–200 m (160–660 ft). Exhibiting several primitive features, the frilled shark has often been termed a living fossil. It reaches a length of 2 m (6.6 ft) and has a dark brown, eel-like body with the dorsal, pelvic, and anal fins placed far back. Its common name comes from the frilly or fringed appearance of its six pairs of gill slits, with the first pair meeting across the throat. 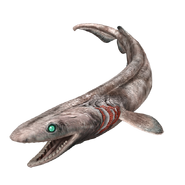