The Parody Wiki
Register
Don't have an account?
Sign In
Advertisement
in: Pages with broken file links, The Aqua Teens, Anthropomorphic Food Items,
and 26 more

Frylock is the main protagonist of Aqua Teen Hunger Force. He is the most rational and intelligent member of the Aqua Teens. He is also considered to be a scientist; although, some of his motives and means of doing scientific research are a bit shady at times.

Frylock is a living box of french fries. His box is red with eyes, a mouth, and a goatee. He also has a lightning scar under his left eye. He does not, however, possess a nose or visible ears. He doesn't have any arms or legs either. In place of his legs and arms, he levitates and uses his fries to grab things, type on keyboards, write on paper, make hand gestures, etc. He has a rarely seen gem on his back, which is hinted to be the source of his powers, as indicated in "Hoppy Bunny".

Frylock is by far the most logicalically thinking member of the Aqua Teens. He is often the first to point out why Shake's crazy schemes are reprehensible. For example, Frylock was the one who put out all of the "Olympic torches" Shake set up in "Dusty Gozongas." He is often the only member of the group who actually wishes to solve the conflict of the episode, and in episodes like "Rabbot" and "Moon Master," he seems to be the only Aqua Teen who is even aware of the conflict. He is also quite intelligent, being able to invent things such as a shrink ray, the Super Computer, and Robositter. Frylock is the only voice of reason in a sea of nonsense. In addition to this, he sometimes has more authority over his roommates than Shake and has disciplined them at least once or twice.

Despite often being depicted as such a sensible person, Frylock has, on occasion, been depicted as insane or corrupt. The most notable example is "Fry Legs," where he murdered a human being to date the Computer Repair Woman. In "Der Inflatable Fuhrer," Frylock was seen creating lethal weapons for a Balloon Hitler; he wasn't, however, aware of the person he was dealing with at first. In "One Hundred," he was obsessed with the number one hundred, an obvious parody of The Number 23. In "The Cloning ," he used his Cloner to create a large sum of counterfeit money to open a chain of restaurant to feed the starving children of the world. In "Big Bro," he abused the Big Brother program to date a boy's mother, and went so far as to help Carl fake his death.

In another origin story Frylock has the ability to shoot various elements out of his eyes. His most commonly used "elemental vision" is his laser eyes. They are quick beams of energy released from his eyes, and they are powerful enough to take down many of the Aqua Teen's enemies. This power has been used less and less over time (unless you count Frylock's use of them in the opening). This is possibly because Matt Maiellaro and Dave Willis realized how overpowered this would make Frylock. In "Laser Lenses," it was stated that one cannot use this power too much, because it would do damage to one's eyes. Frylock has also used a fire-extinguishing version in "Dusty Gozongas" to put out Shake's "Olympic" torches. He also used a Fire Vision in "Hands on a Hamburger" and Ice Vision to freeze Carl in "The Clowning." It was stated that the latter could be undone when Frylock so chooses.

In "Hoppy Bunny," Shake ripped the jewel out from Frylock's back, and Frylock became very sick without it. This implies that the jewel is the source of Frylock's power. Frylock is also sitting in the chair instead of floating, so it is implied that the jewel also gives Frylock the ability to fly. However, this is greatly contradicted in the very next episode "Laser Lenses." Frylock's contact Lenses are stolen by Shake. In addition to becoming nearly blind, Frylock loses his ability to use his Laser Vision. Shake abuses the lenses for his usual hi-jinks to the point of his laser beams becoming extremely weak. The true source of Frylock's powers is unknown, because Aqua Teen Hunger Force barely has any continuity.

Frylock's Jewel was also apparently the source of his super intelligence. In the episode "Brain Fairy" after Frylock agreed at the DMV to be an organ donor upon his death, his jewel was stolen in lieu of his brain and he became quite stupid afterwards. He also has a much smaller version of the jewel connected in his head via wires that acts as an auxiliary source of intelligence, however, this version must remain plugged in or otherwise connected to electricity (such as a car battery) in order for him to retain his intelligence. The Jewel is also given its first official name, being the 'Jewel of Idahocules'. But again, due to almost no continuity, this likely isn't always the case.

The jewel was given another conflicting origin story in the series finale, where it is shown to be the source of Frylock's powers, and also his life energy. It is said to have a half-life of 15 years and the only place to get a new one is on another planet called Clamydia. The jewel is kept inside a Mother Clam and is made of 'Clamydian Quartz" a stone with magical properties that is unlike any other gem on Earth. The jewel is also given the new name, the 'Jewel of Clamydio [Clamydia]'. However, where exactly Frylock and the other Aqua Teens got their original gems (and presumably others since they are older than 15) is never mentioned because of even more continuity errors.

Frydar, is essentially Frylock's own personal radar. He can use it to follow scents, etc. Visibly, one of his fries protrudes out farther than the rest, bends into a 90°angle, and then rotates in a circular motion.

Despite being roommates, Shake and Frylock are often at each other's throats. Shake will come up with some sort of ridiculous idea for his own personal gain, and Frylock will do his best to foil Shake's plans. Shake and Frylock often insult each other, sometimes face-to-face. Shake has died due to the show's lack of continuity, and Frylock has been shown not to care in most situations (with "Video Ouija" as a notable exception, where he tried to revive Shake). While trying to work, Frylock is often annoyed by Shake's interference, such as when Shake starts singing a song about farting in "Time Machine" or trying to find a way to torture Meatwad in various episodes.

Frylock appears as somewhat of a father figure towards Meatwad. Frylock is often looking out for Meatwad's best interest. On several occasions, Frylock has tried to teach Meatwad in more than one academic area, despite it being completely hopeless. He has also tried to steer Meatwad away from drugs, as seen in "Moonajuana." Frylock has, however, been shown to lose his temper with Meatwad, sometimes completely snapping at him, most notably in the episode "Monster."

Frylock's relationship with Carl has varied greatly over the years. In the first few years, Carl was often easily annoyed by Frylock, usually because of whatever weird things were going on in the episode. Frylock would often try to do good things for Carl, but Frylock was not above using Carl for his experiments in episodes like "Total Re-Carl" and "Dumber Days." Frylock once manipulated Carl into helping him move in "The," by means of not telling him that the other Aqua Teens would not be moving. As time went on, Carl seemed to accept Frylock, along with Shake and Meatwad, more and more. In later episodes like "Dickesode" and "Bible Fruit," Carl was seen hanging out with the Aqua Teens; however, in "Bible Fruit," he was promised sexual intercourse, and immediately when he found out Frylock's friends were fruits. Carl may be the one of the only friends Frylock has. In "The," Frylock couldn't get anyone to attend his house-warming party, but Carl may have attended if his eyes hadn't been shut completely. In "Couples Skate," Carl may have been the first person Frylock called for help after being dragged off to the Mohave Desert. Carl eventually went to save the Aqua Teens, but this may be for his own personal gain, as Frylock's plan did involve killing Markula.

Frylock does not approve of the actions of Ignignokt and Err, especially when they try corrupting Meatwad. Frylock also considers them to be very stupid and often talks down to them. Frylock seems to have less trouble with Emory and Oglethorpe , as he seems to understand that they are incompetent, stating that they "couldn't take over a bowl full of jello." He has very little patience for the Cybernetic Ghost of Christmas Past from the Future, possibly less so than he does for Ignignokt and Err. Frylock's relationship with Dr. Weird is unknown. There is a picture of him with Dr. Weird in his room; however, they have never interacted together, except in the film. In the film, it was revealed that Frylock may have created Dr. Weird, but Matt and Dave revealed that the Aqua Teens are creations of Dr. Weird, so this is either part of Dr. Weird's convoluted plans to mess with the Aqua Teens or, in the more likely explanation, the film is non-canon as are most episodes of the show. 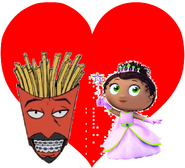 Frylock has appeared in almost every episode of the show, not counting specials and DVD extras such as "Anime Talk Show" and "Future Wolf II: Never Cry Wolf." He was absent in "Sirens" and "Spacecadeuce." However, he did not physically appear on-screen in "Robots Everywhere" because he was only heard over the phone.