Fung (also called "Dirk" in some concept art) is a character in the Nickelodeon television series Kung Fu Panda: Legends of Awesomeness. He is a crocodile who serves as the leader of a band of crocodile bandits. Fung and his bandit followers made their first appearance in "The Princess and the Po" when they temporarily succeeded in stealing Princess Mei Li's valuable possessions before being thwarted by Po, Tigress, and Mantis. Fung and his bandits continue to appear regularly in the series. 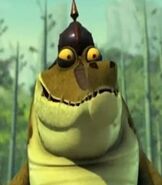 Add a photo to this gallery
Retrieved from "https://parody.fandom.com/wiki/Fung?oldid=1786457"
Community content is available under CC-BY-SA unless otherwise noted.