Start a Wiki
Genevieve Knight "G." Hannelius is a young American actress who has had many Disney roles, her first job as Amy Little in Leo Little's Big Show. Most recently, she has taken the role of Avery Jennings on Dog With a Blog. She took over the voice role of RoseBud from the Air Buddies series and has also appeared in The Search for Santa Paws. She played Emily in the Disney Channel Original Movie Den Brother. In Sonny with a Chance, she played Dakota Condor in five episodes. She also played Jo Keener in the show Good Luck Charlie and Tiffany in Hannah Montana. She also guest starred in the series Fish Hooks as a young nice fish named Amanda, and guest starred in Jessie as Mackenzie.

In the Disney Junior animated series Sofia the First, she provided the voice of Lady Joy in the episode "Sofia the Second". She also guest starred as Little Bits in the Wander Over Yonder episode "The Stray" and Ruby in Future-Worm!.

Dakota Condor from Sonny with a Chance

Avery Jennings from Dog With a Blog 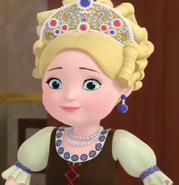 Lady Joy from Sofia the First 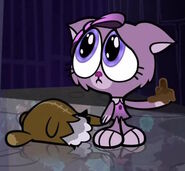 Little Bits from Wander Over Yonder

With Francesca Capaldi at the Oz the Great and Powerful premiere. 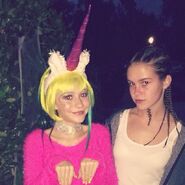 G. Hannelius (age 5) on the set of Sonny with a Chance with Demi Lovato.

Add a photo to this gallery
Retrieved from "https://parody.fandom.com/wiki/G._Hannelius?oldid=1926220"
Community content is available under CC-BY-SA unless otherwise noted.