The Parody Wiki
Register
Don't have an account?
Sign In
Advertisement
in: Characters, Animals, African Animals,
and 49 more

Gaboon vipers (Bitis gabonica) are the largest vipers in the world. Gaboon vipers have a unique pattern of colors that range from shades of brown to pinks and purples. The patterns on its body help it stay camouflaged among the leaves of the forest floor. They have broad heads and horns become present with age. They’re also known for their large fangs that can reach up to 2 inches in length. Gaboon vipers play a large roll in controlling the rodent population in the rainforest. Their bite is so lethal that smaller prey is killed instantly when bitten; larger animals are struck, released and then tracked by scent. 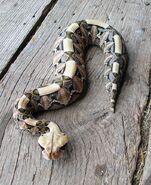 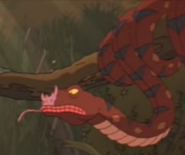