The Parody Wiki
Register
Don't have an account?
Sign In
Advertisement
in: Characters, Animals, Extinct Animals,
and 31 more

Gastornis is an extinct genus of large flightless birds that lived during the late Paleocene and Eocene epochs of the Cenozoic era. The genus is currently thought to contain three or four distinct species, known from incomplete fossil remains, found in western-central Europe (England,Belgium, France and Germany). More complete specimens are known from a fourth, North American species, which had previously been classified in the distinct genus Diatryma. Many scientists now consider Diatryma to be so similar to the other species of Gastornis that it should also be included in that genus. A fifth species, also previously classified in its own genus, is known from China. 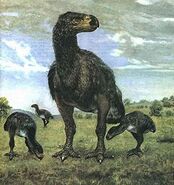 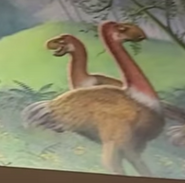