Gavin was a Dakotaraptor who was the leader of an extended family of Dakotaraptors. He is also the father of Roger and Gertie. He is the (former) main antagonist of the film and a herd's member. This misguided Dino-bird proudly trains his kids the fine art of stealing eggs. But after being repeatedly thwarted by Buck, the family embarks on a mission to rid the Ice Age World of their weasel-arch nemesis. 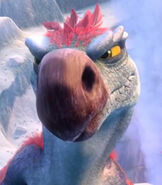 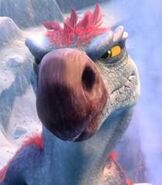 Gavin and his wife had two children, their daughter, Gertie, and their son, Roger, who Gavin thinks is a screw up

"And that's how it's done" ―Gavin to his kids

Gavin and his children all made a living out of stealing other dinosaur eggs. One day in the Dinosaur World, they stole a triceratops egg from a Mother Triceratops. The did this by having Gertie fly in and snatch the egg, while Roger and Gavin flew around the triceratops. Gertie, celebrating her victory began to gloat towards Roger asking him how many eggs he had stolen so far. Roger asked if they can turn out to be vegetarians, instead of stealing dinosaur eggs. Gertie explained that they can eat vegetarians, instead, while tossing the egg back towards her brother. Roger struggled to keep hold of it, until Gavin swooped in and caught the egg, securing it. Gavin explained to Roger that sometimes he wondered how Roger managed to be apart of the family, suggesting that he was a screw up. Suddenly, the three heard Buck, an adventurous and crazy weasel, who happened to be taking a shower near by. Gavin, annoyed at the weasel's presence, he threw the egg back to Roger and the family took off. Buck reassured the triceratops that he would get the egg back. Therefore, he jumped after the Dino birds. He threw gases in Gavin and Gertie's faces all while singing The Marriage of Figaro (Buck Version). Gavin stole the egg but Buck got it out of his mouth, and hid in a tiny cave, with Gavin trying to get in. He slid down the other end of the cave and fell down to the ground. As the dinosaurs still tried to catch the egg, they had Buck surrounded. Dino-Birds about to eat Buck. That was until Buck had finished his song, causing an avalanche of rocks to tumbling down, crushing the Dino birds. Buck ended up returning the egg back to it's mother, a told the mother to get out of the area before the Dino birds came back up from the crash. Gavin angry at Buck. The Dino birds came back up, and angrily stared at Buck, who ended up being launched away, laughing. Gavin stated that Buck had finally signed his death warrant.

Revenge on the Weasel

Buck ended up getting out of the underground dinosaur world, after discovering a prophecy. The Dino birds heard the weasel find his old herd and talk to them about a Stone Tablet and that an asteroid was coming. They the emerged back on the surface of the ice. Gavin explained to his children that Buck had ruined their honest living of stealing dinosaur eggs. Roger stated that it was ironic that they were stealing eggs for an honest living and asked why would they try to destroy Buck, if the asteroid was going to destroy them all. Gavin explained that they'd fly over the asteroid as it kills everyone on Earth once they stopped Buck. Then, they could make the earth their own paradise. Roger pointed out it wasn't possible, but Gavin growled at him and Roger remarked it was a great plan. Roger had great eyesight, from his mother, and Gavin remarked he'd be useless without her eyes, because of her amazing eyesight and he likes to remember his wife's eyes. Roger found the herd with the weasel and they began their journey. They had spotted the herd on a trail, high in the skies and were about to attack them. Buck, noticing that his enemies were following them, he led the herd into a forest. When Gavin swooped down, preparing to kill Buck, Buck had managed to dodge the flying dinosaur, and jump off from his tail, back into the forest where the herd was. Gavin told his kids that they'll have more opportunities to attack them once the herd get's out of the forest.

" C'mon, kids, DIVE!" ―Gavin to his kids after spotting Buck and the herd

Later on, an electrical storm occurred. Gavin, Gertie, and Roger spotted the herd out in the open. They began to dive down after them. Below them, Buck and told his friends not to create any type of friction. Crash and Eddie, two Opossums not knowing what friction is, ended up creating it anyway, and touched each other's paws. This created a sudden strike of purple lightning, which had zapped the Dino birds.

Later that night, the Dino birds stalked the herd. Gavin had set up a job for Roger. He told Roger to steal the weasel, while everyone was asleep. Gavin was overjoyed when Roger did it, only for Roger to not get the weasel and accidentally get a ground sloth called Granny. Granny mistook Gertie for an angel and climbed all over her, but, Gavin sent Roger to help his sister, only for Granny to attack Roger. Gavin sighed and ate Granny, telling his kids that's how it's done. On the other hand, Granny was still alive and was looking for a way out of Gavin's stomach. Trying to get out, she started to drag Gavin all over the place. Gertie helped Gavin cough up Granny and off the cliff. But Granny was launched into the air by a hanging vine. When she said hello to the group, the dinosaurs all screamed, and Gavin ended up punching Granny in the face, causing her to fall back down. The three had watched Granny fall back down and all agreed that it was probably for the best that they had gotten rid of her at least.

"All right, Roger, lead the way." ―Gavin to Roger[src]

The next day, when the asteroid was on the verge of hitting earth, the Dino birds had returned and knocked a Geotopian crystal off a bridge. This prevented the herd and the Geotopians from putting the largest crystal into the Geotopian Volcano, where it could compress the crystals and divert the asteroid. Roger then ended up pinning down Buck, apologizing to him and explaining that he's really conflicted at the moment. Gavin flew toward where Roger was and Gavin told Roger to finish Buck. Buck had told the dinosaurs that if they don't keep the asteroid from crashing down on earth, they'll all die. Gavin told Buck that he was wrong and explained that while all of the mammals run for their lives, he and his children will in the sky, gliding above the collision. Gavin said that the'll be as safe as the flock in the sky, only for one to be hit by a Meteor. He said that it was a "lucky shot", until the entire flock was struck by meteors, followed by a giant meteor. Roger exclaimed that he was right all along, as Gertie had screamed that she didn't want to go extinct. Still not convinced, Gavin prepared to kill Buck, until Roger stepped in and told him that there are more important things than Gavin's pride. He explained if he cared about the safety of his children, then he shouldn't kill Buck. Gertie appeared in tears to agree with her younger brother. Buck also stepped in and stated that he would work with his greatest enemy just for his child, Bronwyn, to have a better future. With a change of heart, Gavin agreed to work with Buck in order to survive. They flew the crystal to put in the volcano. As they prepared to drop it, more meteors came by. Gavin told his kids to watch out, taking the hit from one of the space rocks, and cause him, Buck, Roger, and Gertie to fall down, dropping the crystal some place else. Luckily, one mammoth named Julian had a plan to roll the crystal down the hill so that it can eventually roll into the volcano. The plan works, but the crystals don't shoot up until Granny plugs up the last geyser. The meteor then flies off-course and back into space. The animals and the Dino-birds then celebrate their victory saving earth.

At Peaches and Julian's wedding, two mammoths,  Gavin, Gertie, and Roger danced when Brooke sang My Superstar and officially part of the herd.

Gavin is a brave and tough Dino-Bird that loved his children. However, his ruthlessness often keeps him from thinking clearly as he was more concerned on getting revenge on Buck than helping the herd stop the asteroid. With some convincing from his children, however, Gavin spares the weasel's life so they could save the planet.

Gavin has teal-blue scales with a gray underbelly and red feathers. He has greenish yellow eyes and a black beak, with scuffs and scratches at the tip.

Retrieved from "https://parody.fandom.com/wiki/Gavin?oldid=2552352"
Community content is available under CC-BY-SA unless otherwise noted.