Start a Wiki
Georgia is the kind all-purpose red engine in the 1991 film, The Little Engine That Could. She sleeps in the roundhouse with Jebediah, Pete, Farnsworth and Tillie one morning. She later wakes up where Jebediah is still sleeping. Tillie pulls the milk train and told Georgia to be quiet because she doesn't want to wake Jebediah up. Georgia thinks Tillie is pull the mail train, but Tillie said not today, because she had a plan. Georgia asks Tillie if she had a train to pull. Tillie gets very angry and scolds Georgia that she's an engine. Georgia's boiler begin to feel hurt and Tillie pulled the milk train slowly. Georgia then sent to pull the birthday train by Tower. A clown named Rollo who already the birthday train. After his toys aboarded the birthday train, Georgia preparied to go over the mountains. But one afternoon on the way to the mountains, Georgia suddenly broke down and she can't move at all. She toots for help and the steam puffs came out of her funnel and it went up in the air and a doctor engine named Doc who comes to take her back to the roundhouse. After Georgia's funnel is bandaged, she is told by Doc to be better after a couple of days. 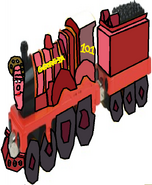 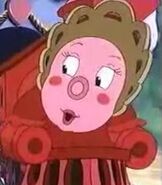 Add a photo to this gallery
Retrieved from "https://parody.fandom.com/wiki/Georgia?oldid=1806160"
Community content is available under CC-BY-SA unless otherwise noted.